Lauren Bailey is Chief Executive Officer and Co-Founder of Upward Projects, a restaurant group that focuses on creating experiences for its local communities. Five of some of the Valley’s favorite restaurants fall under Upward Projects, so it’s easy to see how Bailey stays busy.

“I’m a big fan of giving back to the community you live in. I think it’s really fulfilling and makes you feel more connected to it. It’s just the way I experience joy, and it’s something you can always hold on to when there’s a lot of stress going on,” Bailey said.

Bailey has served as a Big to the same Little for eight years.

She said her own mentors throughout her life had a tremendous impact on her, so it’s great for her to give back to her Little.

“It allows you to give back in a way, but this whole time I think that I have felt like I’ve gotten more from it than (her Little) probably has,” Bailey said.

In her time with Big Brothers Big Sisters of Central Arizona, Bailey has been a confidant for her Little, and she feels they’ve grown together.

“I’ve had her since she was six, so I’ve been through a lot of different stages of her development. From being a child to now she’s a full on teenager, so it’s evolved over time,” Bailey said.

Bigs are often an additional source for Littles to go to when they need someone to trust or that they know care for them, but Bailey explains that she also helps grow her Little’s interests and that they have plenty of fun whenever they meet.

The two sometimes have shopping trips and go out for lunch, and other times Bailey brings her into her workspace.

“I’ve been a safe place for her to land, but we share a lot of the same interests,” Bailey said. “She’s very interested in what I do, being an entrepreneur and running a business, so she always wants to know about that.”

Bailey has taken her Little with her to work over the years at Federal Pizza, and her Little enjoys going and making pizzas.

In the time they’ve spent with one another, Bailey has learned resiliency and curiosity from her Little.

“She’s taught me so many things, but most of all resiliency and how powerful that can be in your life,” Bailey said.

Throughout the pandemic many young people have made the switch to online learning, Bailey’s Little included, and the abrupt change hasn’t been easy for everyone. Bailey said that she has tried to teach her Little about advocating for herself.

Bailey gave an example of her Little’s time in the virtual classroom and how it can be rough when there’s not a stable Wi-Fi connection and issues with technology. Bailey says they’ve had a lot of talks about, “asking for what you need, making it known and leveraging resources.”

“Building your resiliency and grit will take you so far in life, outside of just surviving whatever life hands to you. That it helps you build a tool to be successful with whatever you put your mind to,” Bailey said. She hopes that is one thing her Little takes away from their mentor relationship.

Bailey finds being a Big fulfilling and is excited to carry on the long-term commitment to her Little.

“To make that long-term commitment, allows you to see the long-lasting life impact you can make on someone else,” said Bailey. 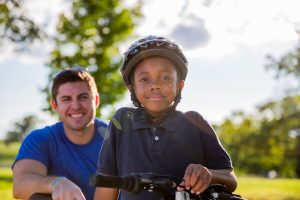 Make a year-end donation to BBBSAZ to give the gift of mentorship to a child in your community.