All Dominic wanted was a buddy to go exploring with. All Alex wanted was to show someone the things he loved. Together, the two have taken on the state of Arizona to see it in all its beauty. In fact, it doesn’t seem like the two ever sit still. 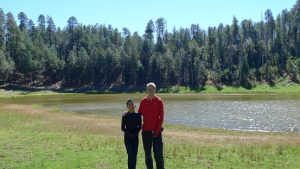 “We went to a cave,” Alex begins, “to see him explore and see his eyes open is one of my favorite memories. He probably didn’t even know it [the cave] existed.” In addition to cave expeditions, the two have made their way to the Grand Canyon, a goal they had set for themselves earlier and hope to go camping in the near future.

Alex admits he wasn’t sure at first if he’d be a good Big Brother, but has learned over the few years of his match that he does really love it. “It’s awesome to have someone look up to you. It’s a passion I didn’t know I had.” He also encourages others to become Bigs. “If you’re going out to do something, why not do it with someone?”

When the two aren’t exploring mountains and caves and canyons, they enjoy a good air show. Dominic even got sit in a few as the propellers whirled and twirled, ready for take-off. While Dominic stayed firmly on the ground, time has flown for their relationship already reaching the 3 year mark.
“You have nothing to lose. You can only gain from this experience.”